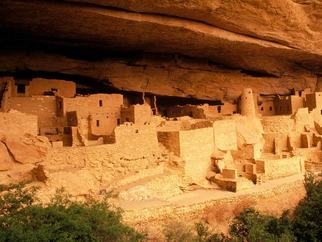 The Fullerton family, making its way through the Rockies from dustbowl Oklahoma in the Great Migration, was an unlikely sight. The upright German piano in the truck bed, a star of David  shining down on a nativity scene (and other peculiarities) emblazoned on the doors, the look of unrepressed merriment on the woman's face contrasting with the ineffable sorrow etched deeply into the man's brow. The three children between them wrestling (continuously? all the way from Buttstubble, OK?) for pride of place on the sprung upholstery of the bench seat - all suggested a history and a future unlike their Okie neighbors, perhaps, but maybe not too different from the many threads and braids that knit together the American tapestry.

Leon Fullerton's grandparents had  bookmatched first names - Abraham and Sarah - but there was no similarity of creed or dispostion. Pap Fullerton, son of Abraham and Sarah Fullerton, was raised in a Pentacostal congregration long on admonition and disinclined to let a good rod gather dust by sparing it. A widower since the age of 27 (his late wife, it was said by a distant, waggish aunt, had unwittingly traded a life of eastern sweatshop wage slavery for "sage slavery" - the relentlessly grueling lot of a prairie bride), Abraham had been, until his untimely demise beneath the hooves of a poorly churched brahma bull, an itinerant preacher, self-taught and uninterested in the urban (if you could call the Oklahoma City of the late 1800s urban) niceties of polite theological discourse and debate.

It was Abraham Fullerton that Leon described, or at least modeled his antagonist after, in one of his most caustic ballads, "True Believer." Though Leon only had a dim and reductive memory of his paternal grandfather, the old man was often enough a topic of dinner conversation that the young Fullerton sometimes believed he could shape him from clay - the concept of Gollum engrained into him as deeply as the concept of ressurection at an early age.

The Reverend Fullerton's death, transpiring, as it did, not long before the family was forced westward, while not exactly welcome or wished for, afforded a certain convenience to the family situation: one more passenger, and they'd've had to buy a second vehicle.

Leon's father Jasper's gloom, nearly impenetrable for the totality of the drive, had little to do with his Abraham's death. If anything, it might have cheered him up a bit. The gloom was born of (a) the unlikelihood of getting the old Ford over the mountains, (b) the prospect of moving in, albeit temporarily (he prayed) with his brother Gus in Baker, California, a municipality about which, years later, Leon would hear a drunk who picked him up hitchhiking describe as the place where, if our planet ever needed an enema, God would insert the tube, and (c) a lifetime of living in the deep shadow of a man feared and avoided (successfully, for the most part) by neighbors and (less successfully, we can assume) family alike. (While old Abraham Fullerton had a following, it was said to follow at a safe distance. No one within a mile of their house attended any of his services, with the obvious exception of his immediate family, possible brought to church every Sunday for no other reasons than to warm the first pew and to pass the baskets.)

Coincidentally (or portentously) Leon's mother, Ada, nee Ada Baum, was daughter of another Sarah and Abraham. Sarah and Rabbi Abraham Baum, a daringly free-thinking couple active in the Reform Judaism movement spawned in the German quarters of Cincinnati. Abraham and Sarah were enthusiastic disciple of movement founder Isaac Wise. ("Groupies is what they were, Pap and Ma both," Leon told biographer Rex Geronimo. "Practically throwing their underwear at Reb Wise every time they saw him officiate. High holy days, they'd be out on the steps of the temple before sunup.

Sarah was the youngest of an extensive brood, and despite what they saw as the young couple's overzealous religious inclinations, her parents were happy she'd landed a rabbi. Even a crazy one.

Rabbi Abe finally got all his relatives to chip in for Yeshiva, he graduated at 22 and they went west, young man, to plant the seeds of Zion in the Great Southwest. Shtetlers. Never was convinced that Palestine was the richest soil for the Mosaic culture to take root, so they set out in the other direction.

Their destination was Anasazi country. Apparently Abraham had seen some pictures of ruins and they looked biblical or something. Prophetic. He wasn't what you'd call a close reader, but he'd begun dabbling in Cabala at an early age. Never a good idea - it's not recommended for anyone under forty. Anyhow, he got it in his head that the Anasazi were the lost tribe of Benjamin. Got as far as Oklahoma before he found out that the Anasazis had got themselves lost again. Succumbed to ethnic cleansing or celibacy or fluoridation only a few hundred years back. Kicked himself because he'd just missed 'em. Pap speculated that they all fell off their cliff cave. Anyhow, old Abe just plopped down where he was and tried setting up shop for the Cherokee Chosen. That's when he found out lesson two, that there weren't any. If there ever had been (he had obscure reasons for thinking so) the Christians had seen that. Abe had been beaten them to the punch bowl.

But he and Sarah were cockeyed optimists, and there's more'n one way to plant a sabra. They settled down in Tulsa and got pregnant, instead.