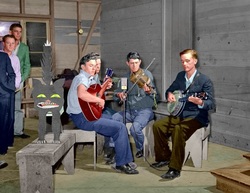 Leon Fullerton had a vast country/western repertoire and penned several classics himself. This didn't, at first, sit well with his radical parents, who were intent on forgetting their Depression years as thoroughly as possible. He told biographer Rex Geronimo that he finally won them over, at least provisionally, by reminding them that some of their favorite singers - Florence Reece, Aunt Molly Jackson, Jimmy Driftwood, and of course, Woody Guthrie - were about as country as musicians could get.

That Guthrie's dustbowl-to-California migration mirrored the Fullertons' own could not have gone unnoticed by the elder Fullertons. As Fullerton related it to Geronimo, "I said I'm keeping some Okie, and they finally said, okey-dokey."