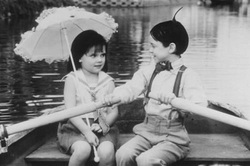 Not necessarily in that order.

In his unfinished memoir, Leon Fullerton wrote: "The night I heard Roy Orbison at the Grand Old Opry I threw in the towel on love songs."

A slight exaggeration. He did pen a few, in moments of weakness. He rarely performed or recorded them, but a few got the better of him and made it onto a single or album.  Here, for better and for worse, is a representative sampling, as interpreted by his nephews Raphael Gunn and Delmont Fullerton, better known as the Del-Rays.